In June we visited Latvian Winner 2016 show with Liina, Tom and Ups with following results:

It all started of with on Friday with the specialty of Irish Wolfhounds, judged by Irmgard de Haan-de Levie.
It was the first show for our Lily who was first in her class.
We also showed one boy, Rambo, from last litter - without any show experience, his prize was EVH- can not be judged as he could not understand, why the judge wants to go over him. But we got a lovely description so you might see more of him in the show ring in future.
His mother Käpik, completely untrimmed and overweight was a Good this time.
But - it is the spirit of the show we went there for and descriptions of dogs, so we are happy with the results.

On Saturday, it was Estonian Winner 2016, international show day. Only dachshunds participated this time.
Mõmmi was BOB baby at his debute show. We did not show him in the finals, as we thought it might be too much for the little dachs.
Tom was shown as a junior and took ESTJW16 title, was also BOS junior and Best Male and BOS of the whole breed.
Ups was 1st in veteran class with excellent. Liina saved the day by being Best Bitch 1 and BOS with CACIB and ESTW16.
Both breeds were judged by Anett Edlander.

Thank you judges, thank you Anne Toompalu and Ilme Kukk for handling my dogs at the specialty on Sunday! 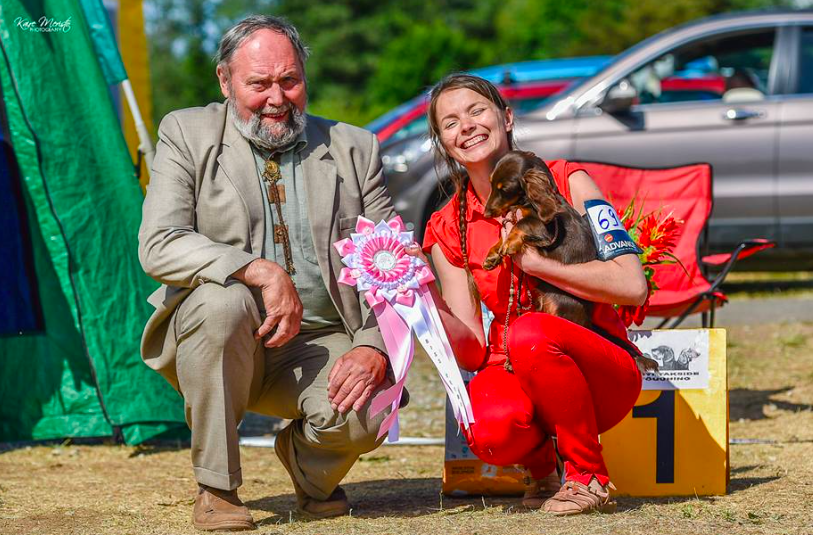 5 years ago we visited this show and came back with Mia as junior champion and Ups as champion of Ukraine.

This time, it was Mia's daughter Liina together with Tom and granny Ups in veteran class visiting the same town.

We also had one guest with us - Conrad, the pyrenean mountain dog. Conrad is co-owned by us togehter with kennel Echo de'Chien.

Results speak for themselves:

We could not be more happy with results - all dogs who were with us became also Ukrainian champions, junior champion or veteran champion! Thank you all judges and especially thank you Jouni Niemela for your help and Külli Martinson for organizing the trip! 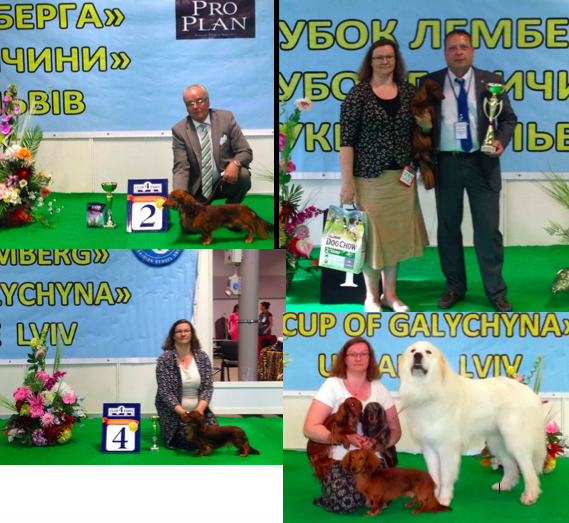 Pan Boleslaw is looking for owners

Due to cancellation, son of Mia and Basim, Iiah's Pan Boleslaw is looking for new owners. Boleslaw will be a miniature dachshund that is perspective both for woods as well as for shows. Again once more Tallinn Winner show is over and we had great time there as usual. Liina added to her account one more CACIB and title TLNW16 being also BOB under judge Juha Putkonen. Tom added two titles - TLNJW16 and TLNW16 and was BOS this time under judge Kristiina Ahlberg. Thank you Ilme for showing judge, to Tiina for being ready to show Ups and to Kaire Meristo for the beautiful picture of our Liina: 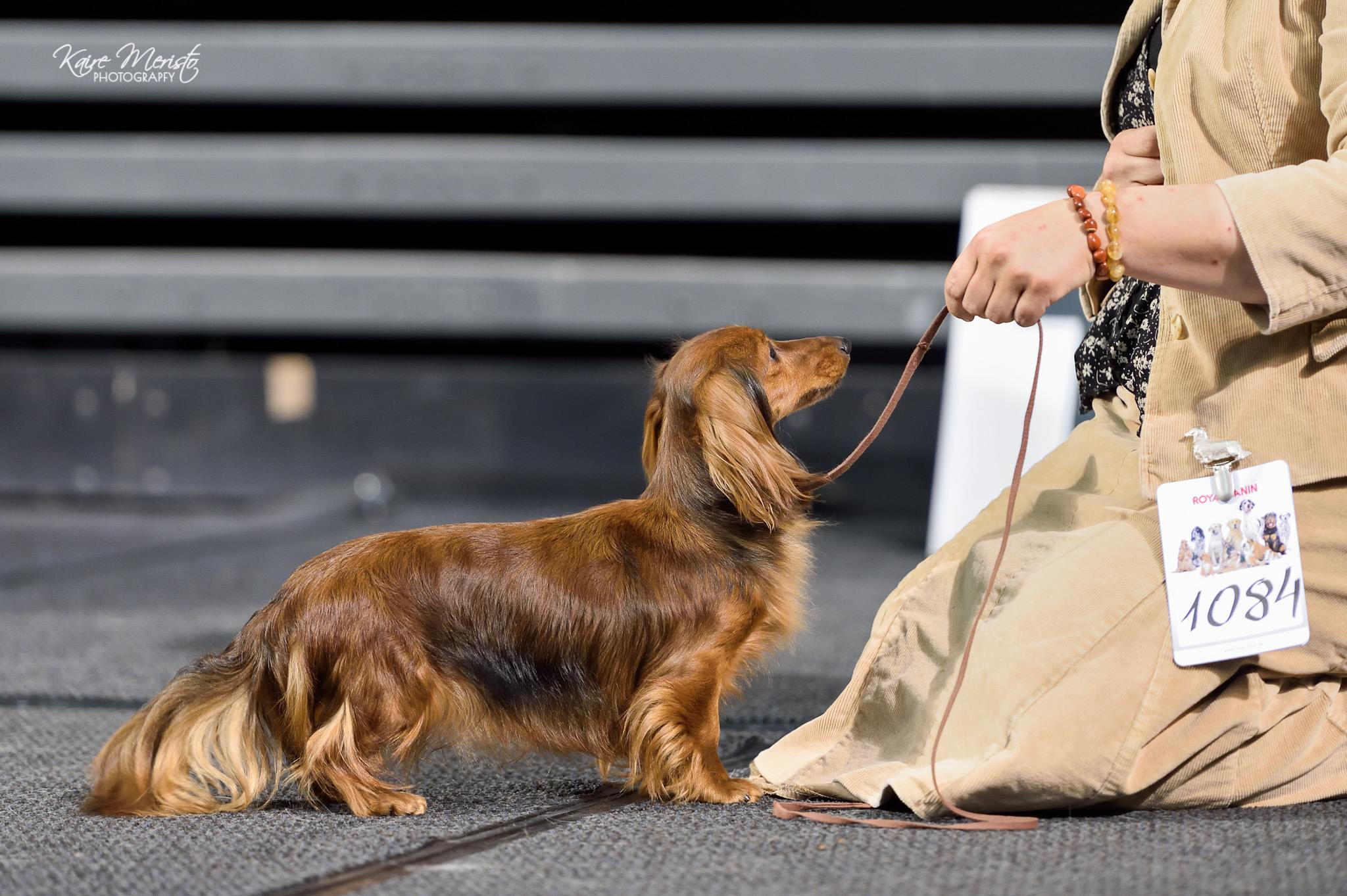 With all the showing and busy spring time, I noticed that we have not shared with you yet our biggest news from this spring - birth of our two litters:

7.2.16 Mia gave birth to two boys and three girls, all red shaded in color. You can read more of them on their page here. Two of the boys are yet looking for their homes, girls are all spoken for already.

3.3.16 Ella gave birth to one black and tan girl that will stay with us. You can learn more about Rutt on her own page here.

On the picture, some of Mia's puppies at 9 weeks of age: 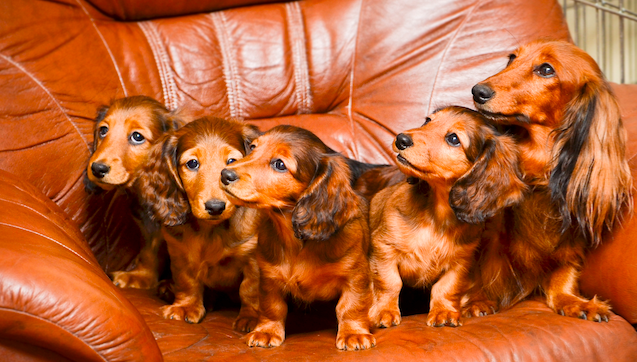 On March 18th, year after Grey left us, Lily came to live in Estonia. Lily is co-owned by us and Silver Salumets and will be shown by both of us. 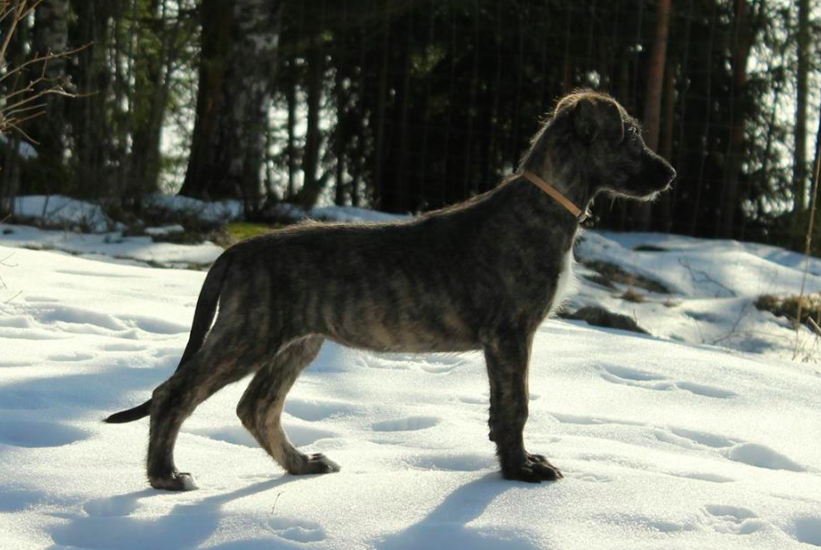 Second day Liina was BOB with CACIB and CAC, so she finished her LV CH and collected her 4th CACIB and third country! Now we just have to wait to confirm her titles!

Thank you Linda and Hedi for company, thank you judges for excellent critiques! 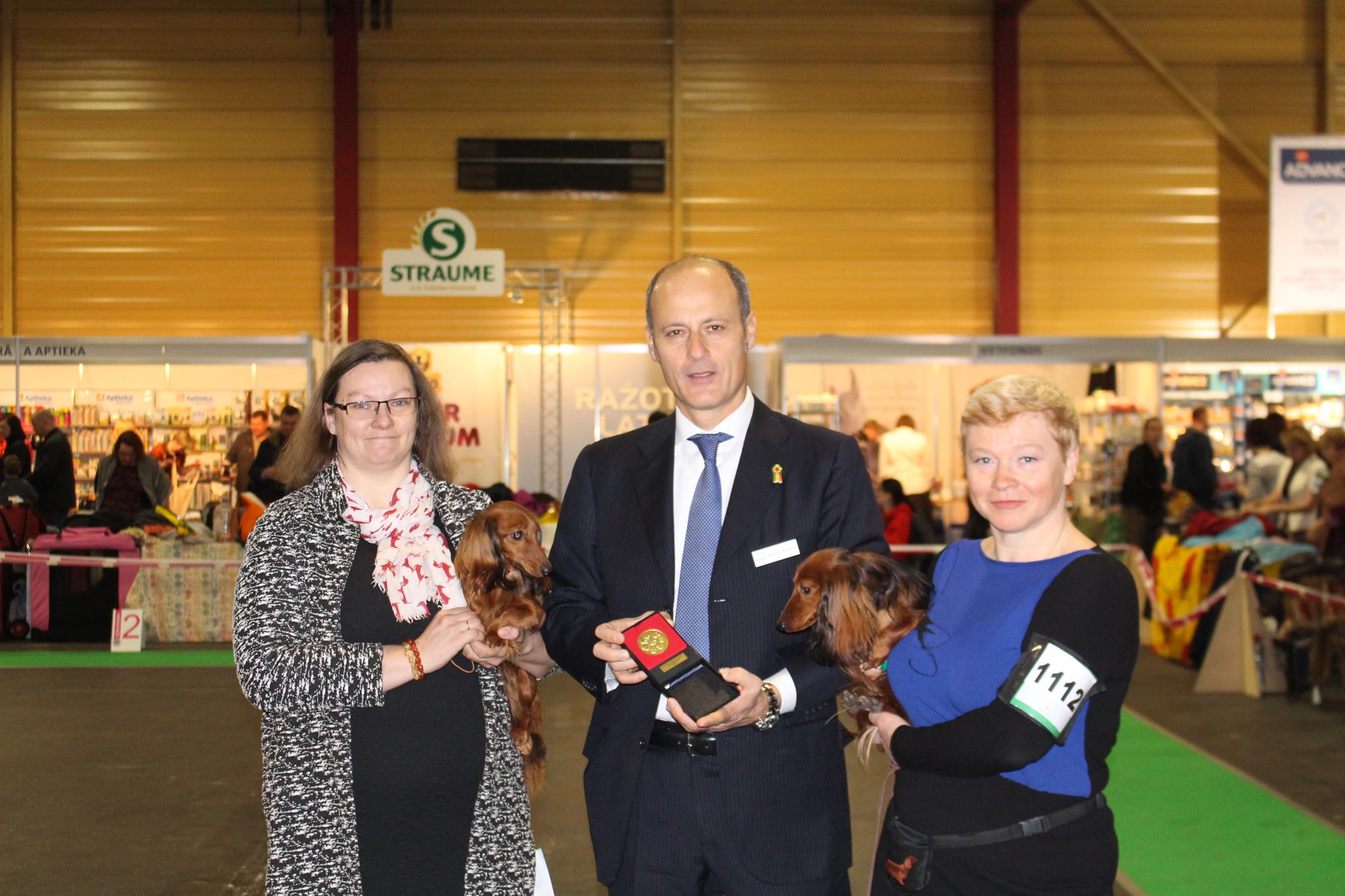 As I was sitting at home with puppies, Janne and Tiina took Tom, Liina and Ups to Lithuania for double CACIB shows of which one was Lithuanian Winner 2016.

Tom was first day winner of the junior class and received Lithuanian JCAC, so we can confirm him now LT J CH title and he is proud LT Junior Winner 2016.
Liina was BB2 on day one with RES CACIB and BB1 with CACIB and BOS on second day, so we can now confirm her LT CH title.
Ups was just preparing for veteran class and was pure excellent both days.

Thank you Janne and Tiina for taking good care of our dogs and showing them so well! Thank you judges for appreciating our dogs! 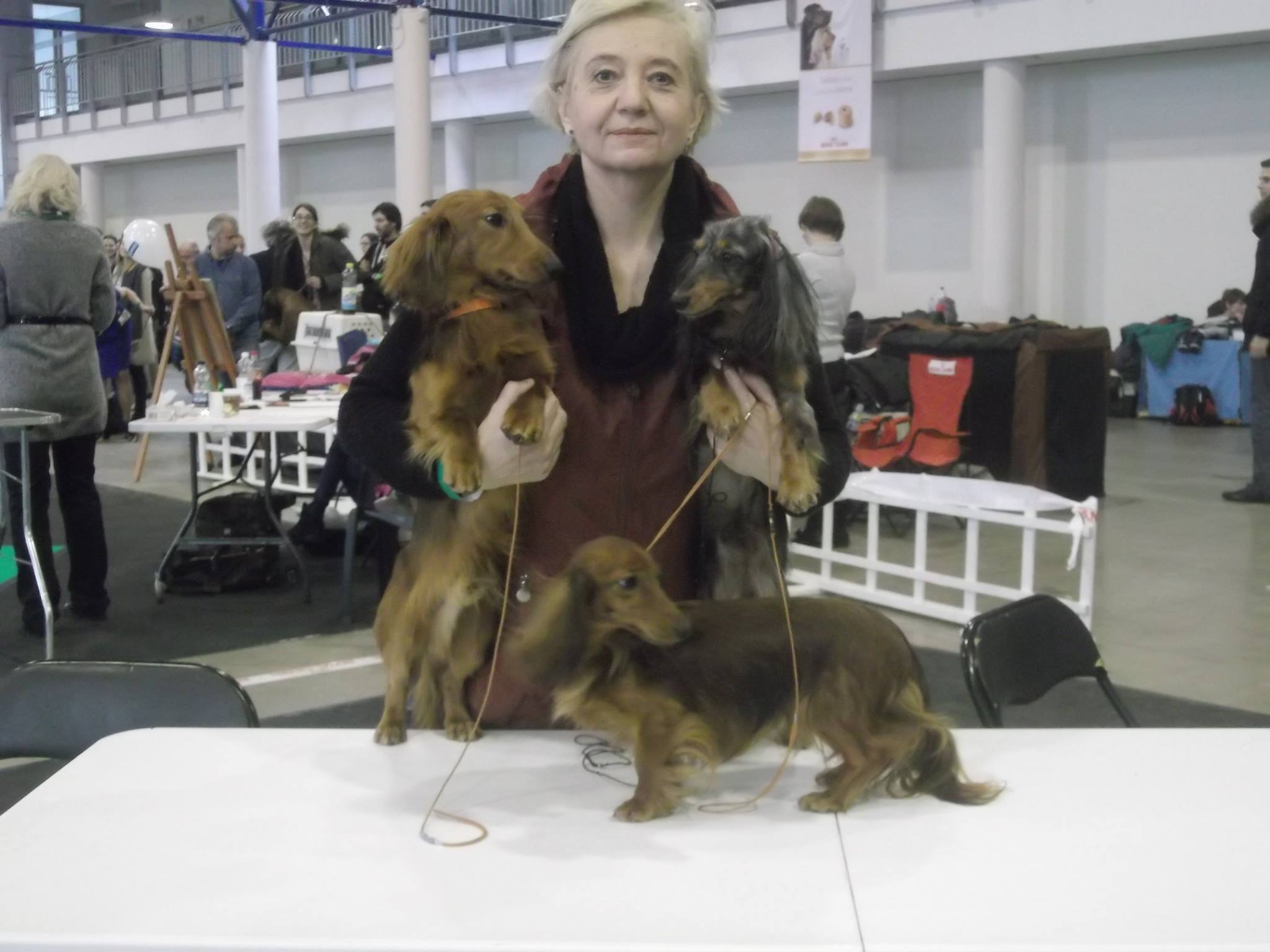 First time ever we took part of the Estonian Dachshund Breed Association's Dachshund of the year competition with following results:

Thank you everyone who helped to get so far - friends, judges, handlers and dog owners! 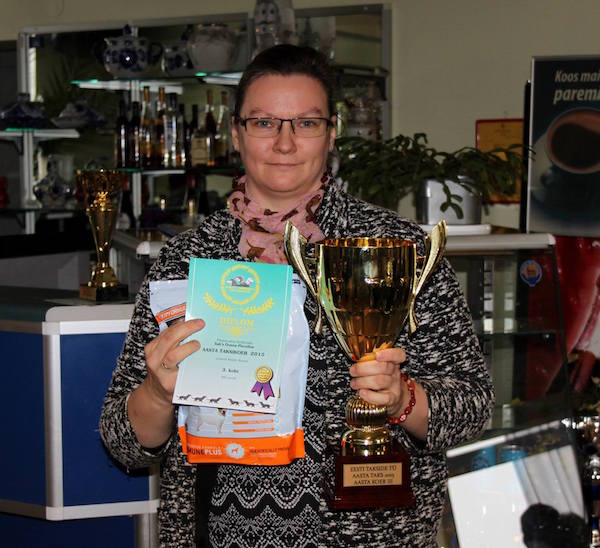 This show has always been a success for us and it was no different this time:

Tom, Iiah's Duke Dapple was BOB and BOB junior and placed 3rd on Junior BIS under Angel Garach Domeck from Spain. Both breeds were judged by Shamil Abrakimov from Russia.

Thank you, judges! Thank you dear Ilme for staying in the finals with Tom with such a great result! 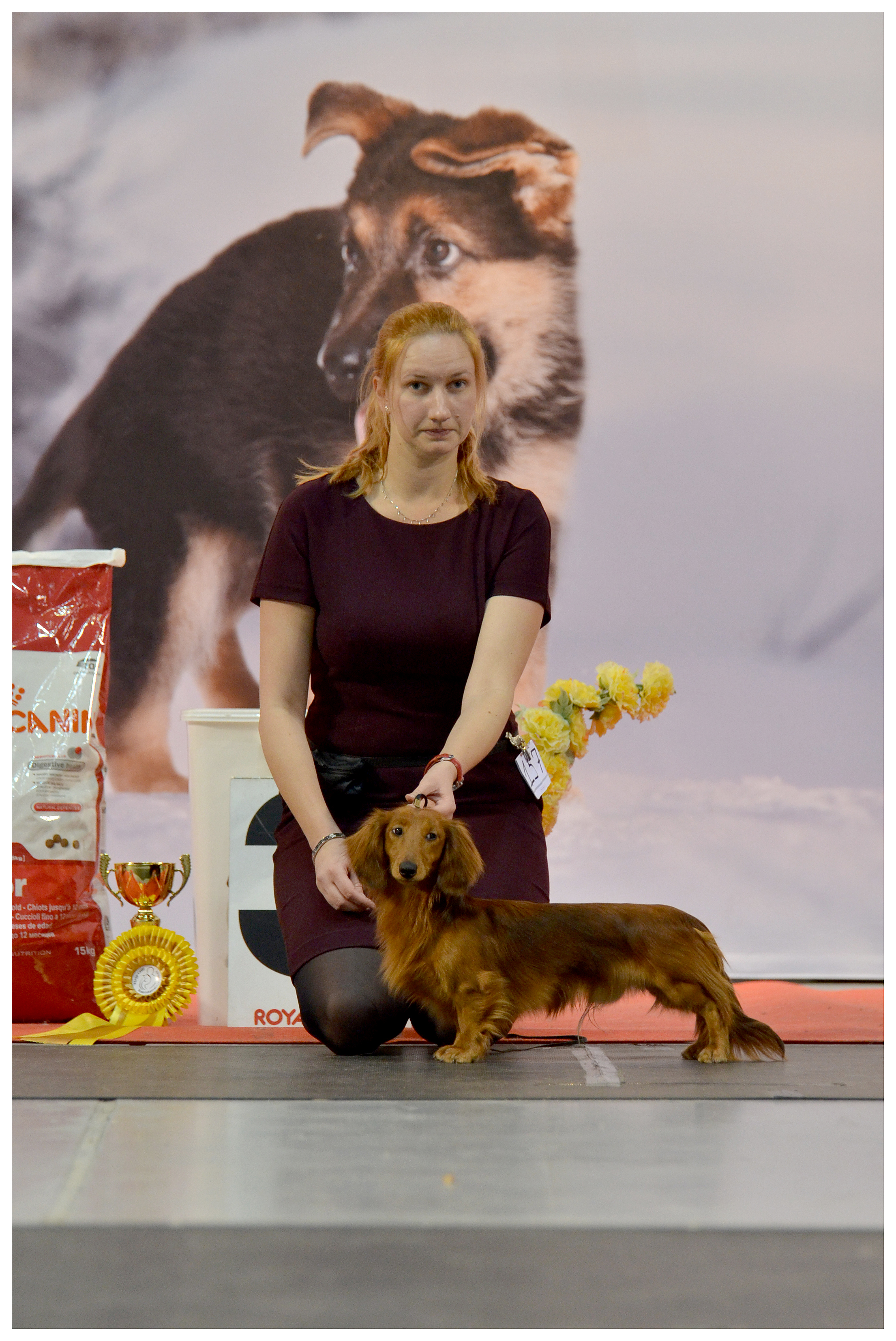 Tom, Iiah's Duke Dapple was BOB and BOB junior with JCAC - his third in a row which entitles us to confirm him title EST J CH.
Liina, Iiah's Donna Piccolina was BOB with CAC - at first possible show after her 2nd birthday, so after working test she will be EST CH.